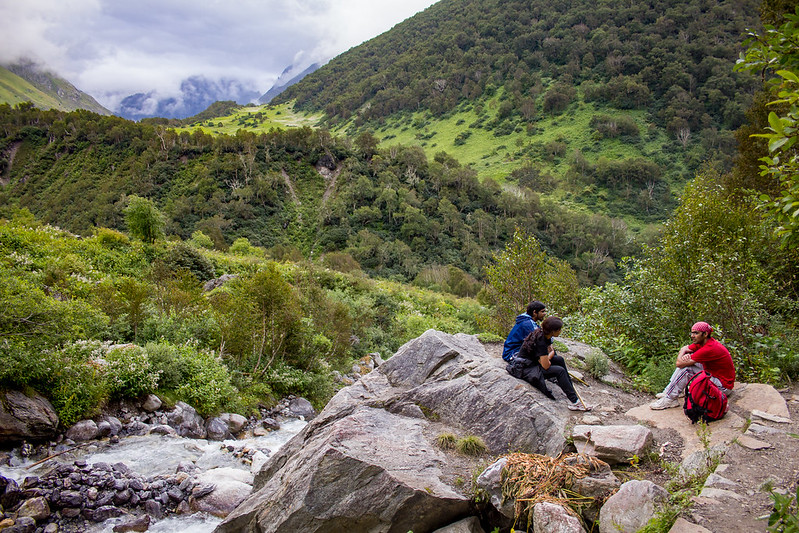 A Trek to the Valley of Flowers

Heavy downpours kept us indoors for the most of the previous evening and night. The next morning we decided to explore the Valley of Flowers, but were met with more downpours and the skies showed no signs of clearing up.

Here is a very long photo story on a trip I (Lovell) made way back in 2011, during the months of August and September, to the Valley of Flowers, along with a bunch of friends — Rebyl, Tulsi, Danny, Johnny, Josh, Rahul, Mukesh and Mohith.

Unwanted technical nonsense: This post contains 94 photos, which are auto resized based on your browser size, lazyloaded and pushed via a CDN, so chill.

We left Ghangaria, a village in Uttarakhand (India), located at an altitude of above 3000 meters, sometime just before noon and started our trek to the Valley of Flowers, a National Park and a World Heritage Site, part of the Nanda Devi Biosphere Reserve. It is situated around 4 to 5 kilometers from the Ghangaria village and is home to more than 500 species of wild flowers.

Once past the checkpost, where the forest officials did some Q&A with us, we were on track, hoping to see some great landscapes, if not flowers.

The rains played hide and seek, but luckily there were no heavy downpours, like the previous night, else we would’ve surely been drenched, considering that we only had rain jackets on, and no other rain-proof clothing to keep us dry.

Good guy Mohith Rao was our timekeeper. We were told to time the trek properly, making sure we head back early, as it tends to get dark really fast, high up here in the mountains. Hence, the power of shooing people around was bestowed on this young man.

The clouds kept sweeping in and out, but we were not ready for the thick cover, which brought the visibility almost to zero. Suddenly the massive mountains around us just disappeared.

Trekking high up in the Himalayas is no joke. Especially if you are not fit. Plus we had trekked uphill, for most part of the previous day, covering some 16-odd kilometers from Govindghat to Ghangaria. Energy levels were a bit low, but our spirits were high. Which meant that we took our own sweet time walking through the valley, stopping whenever we wished to appreciate the landscape around us.

And finally, we were in the midst of it all. The clouds, the flowers, the streams, all coming together to paint this breathtaking picture.

While a bunch of us decided to make a pit stop, Rebyl and I decided to head further and see what we could find. We were told that there was a glacier ahead. The only problem was that we did not have time to head further. Plus we were warned that there were bears which come out once it gets dark. Although I wasn’t sure how true this statement was, but chose to trust the locals on this one.

We pulled back after a while, met up with the boys and had a quick lunch. It was already half past three in the afternoon and we needed to start heading back soon, before the bears got to us.

It was already past five in the evening and we needed to head back quickly. Forest officials patrolling the area urged us to move faster, before the bears came out. But that did not stop us from taking our breaks.

And here is a photo of the gang. From left to right — Mukesh, Joshua, Tulsi, Mohith, John Paul, Rahul, Daniel & Rebyl.

Luckily we made it back in time, and avoided being mauled to death by the mountain bears.