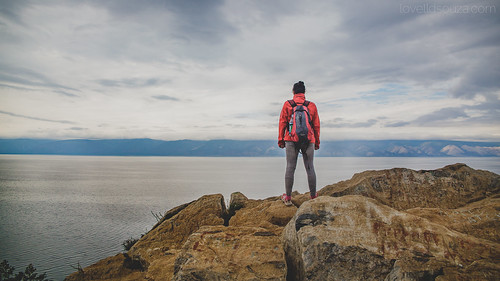 During the initial phase of planning our Russia trip, we read about Olkhon Island, the largest island on Lake Baikal, in the Irkutsk district. We hit up some searches on the Googles, and the photographs we came across, were just literally out of the world. I'm not exaggerating. Both of us had never seen or ever been on a landscape like this (This was of course, before we reached Mongolia). The photographs, especially those of the Baikal Lake, were just stunning. Below is a 360° photo of the lake, frozen during the winter, along with some information from Wikipedia.

Lake Baikal (etymologically meaning, in Mongolian, "the Nature Lake") is a rift lake in Russia, located in southern Siberia, between Irkutsk Oblast to the northwest and the Buryat Republic to the southeast.

It is the largest freshwater lake by volume in the world, containing 22–23% of the world's fresh surface water. With 23,615.39 km3 (5,670 cu mi) of fresh water, it contains more water than the North American Great Lakes combined. With a maximum depth of 1,642 m (5,387 ft), Baikal is the world's deepest lake. It is considered among the world's clearest lakes and is considered the world's oldest lake — at 25 million years. It is the seventh-largest lake in the world by surface area.

Our couchsurfing host, Sergey Yeremeev, the only one on Olkhon Island, was kind enough to accommodate us on a campground of sorts that he had set up inside his property. We had access to a tent equipped with sleeping bags, a light bulb and a few cooking equipment which enabled us to feed ourselves. We shared our roof with a crazy Australian mate (who is travelling the world), a Chinese girl (who lived in India), a Russian guy (with a broken collarbone), another Russian guy (who taught us the Russian way of life), a Colombian girl (who showed us how to party) and a bunch of other cool people, who kept popping in and out over the few days that we were there. More about these cool kids in another post, where we shall do better justice to this story.