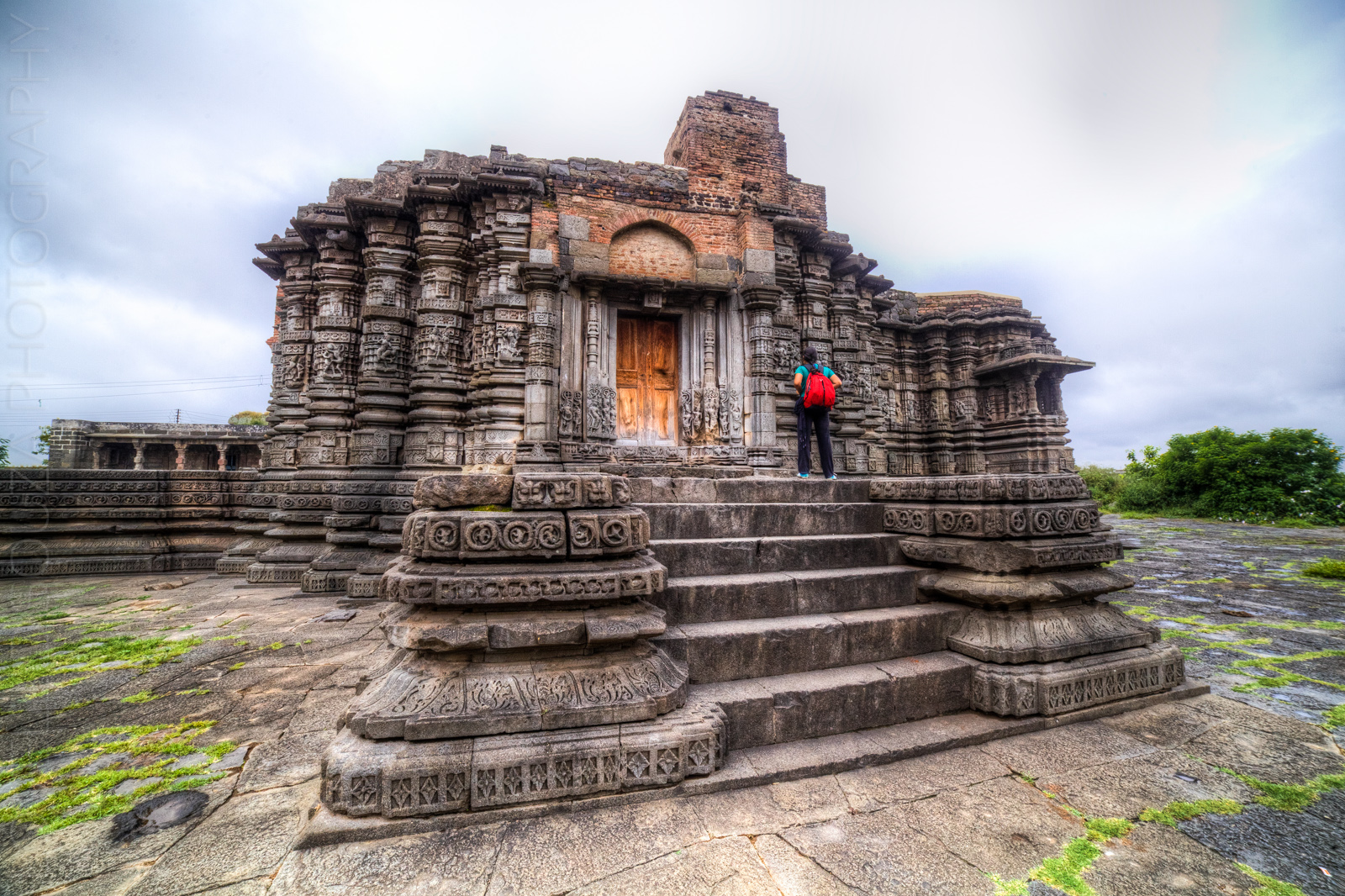 A mammoth meteorite crater in a miniscule village in Maharashtra! We couldn't wrap our brains around this incredible fact even after climbing down the 60,000-year-old crater, walking around it and soaking in the sheer magnificence of it all. But the surprises that Lonar threw our way didn't end at this crater. Day 2 at Lonar offered some more amazing sights that one would never imagine could be found in such an unheard of village.

The morning after the exhausting crater trek, we wanted to make our way to the Mota Maruthi temple. While a local insisted that we head to this temple for its magical powers — your irregular blood pressure levels would be completely cured with just a step into the temple, he claimed — we were more intrigued with the legend that the idol in the temple is an actual fragment of the meteorite itself and has magnetic properties! The locals also promised that we won’t be disappointed with another temple called the Daitya Sudan, built between the 6th and 12th century AD, which is a sort of a mini replica of the famous erotic temples of Khajuraho in Madhya Pradesh. The surprises never cease in Lonar!

So, we packed our bags and checked out of MTDC with the intention of walking to these temples before starting out journey back home home to Goa, by taking a bus out to Aurangabad first. The 2.2 kilometre-long walk to the Mota Maruthi temple was like a walk through a rural animal fair. Pigs lolled around the garbage, dogs fought over leftovers, ruminating calves contemplated about world peace right on the middle of the road. Buffaloes. Goats. Humans! We weren't complaining though. These sights and sounds kept us entertained on our long walk.

Guided by a friendly villager, who saved us from taking the wrong turn that would take us to a cemetery instead of the temple, we reached the Mota Maruthi Temple, which happens to be situated inside the private property of a family, as indicated by a board outside. We walked in excitedly to check out this meteorite deity (and also regulate our BP levels). We were greeted by a quiet and naturally-lit sanctum. The reclining Hanuman idol, as is the case with most Hanuman idols across the country, happens to be completely painted in bright saffron paint, limiting our ability to gauge the actual shape of the stone.

In fact, we couldn't spot any resemblance to the usual depiction of Hanuman, making it easier for us to believe that the locals, when they found this massive, irregular-shaped rock, just built a temple around it, decorated it with stories and legends (It is believed that after the war with Ravana, Hanuman, also known as Maruthi, came here to rest) and made it a popular place of worship. While we will never know if it’s the actual piece of the meteorite, there are also theories floating around that the magnetic properties of the rock might have been caused by the effect that the hyper-velocity impact of the actual collision had on all the land around. But like I said, we will never know. And the colourful stories surrounding it were enough to satiate us travellers.

We were in for another story just around the corner in the form of Ambar Lake. The small circular lake is said to have been the result of the same meteorite crash that led to the creation of Lonar lake. A small fragment of the meteorite, which is now the idol of Hanuman, is said to have broken off from the main meteorite and struck here, causing the depression which holds this lake. While all this is pure speculation and unverified information, it sure made for an interesting conversation between us as we tried to imagine the trajectory of the meteorite and the impact it would have caused.

It was time to move along. We bid goodbye to the last view of the Lonar lake from where we were standing and walked for a kilometre through a labyrinth of small bylanes to our next stop — Daitya Sudan temple that was situated right in the heart of the Lonar village. This beautiful temple dedicated to Lord Vishnu has been dated to the reign of the mighty Chalukya dynasty and could have been built anytime between 6th and 12th century AD. Looking like an asymmetrical star, this place of worship built in the Hemadpanthi style is famous for its resemblance to the more popular Khajuraho temples. There’s an interesting story here too. Lord Vishnu is said to have come down to this place in the form of a young, handsome boy called Daityasudan to slay Lonasura, the same demon, who lived under the Earth in this area. Daityasudan slayed this demon in a battle that ended up creating the Lonar lake or so the story goes.

At first glance, the temple is mighty impressive. For those familiar with the other temples (Badami, Pattadakal) built by the Chalukya Dynasty, which ruled Central and Southern India, between the 6th and 12th centuries, the Daitya Sudan temple will immediately remind you of them with its exquisite style, rich intricate carvings. There is an air of serenity around this beautiful temple that instantly put us in a mood to linger, stare and appreciate what you are looking at. The detailed carvings that covered the entire surface of the temple depicted everything from deities, stories from the puranas and epics to history from that era and erotic imagery a la Khajuraho.

When we stepped inside the main temple, the cold stone flooring, the dark temple interiors and the iron ore idol of this Vishnu avatar, which was made to look like stone, added an extra edge of mystique to this place.

When we walked out, an old man, who happened to be the caretaker of the temple, started chatting us up. When he learnt that we had come here all the way from Goa, he insisted on taking us to another mini temple in the same compound.

He opened the locked doors of the temple to reveal a total surprise — Trimurthi idols. For those not in the know, this refers to Brahma, Vishnu and Shiva, the holy trinity of Hinduism — the creator, the preserver and the destroyer. What excited me most was the fact that this was the first time I ever got to see a statue of Brahma, whose idolisation is a rarity in this country.

In fact, there are only a handful of temples dedicated to the worship of Lord Brahma in India. The reason? A curse. One of the version of the story goes that Brahma and Vishnu were once fighting over who is the most powerful of the trio. Their argument got so heated that the other worried Gods begged Lord Shiva to intervene. To end the issue, Shiva assumed the form of a gigantic column of light, which shot up into the heavens and went all the way down into the darkest parts of the netherworld. Both Brahma and Vishnu were asked to find the beginning or the end of that light to determine who is the mightiest of them. While Brahma assumed the form of a swan and glided upwards along the length of the light, Vishnu went all the way down in the avatar of a boar. They kept travelling and travelling and couldn't find where the light began or ended. After a futile journey, Vishnu humbly accepted defeat and admitted that Shiva is more powerful than him. Brahma however, decide to play a trick. He found a Ketaki flower on his way up the column of light and decided to bring it back to Shiva and claim that he found it on the summit of the light. Shiva, angered by this lie, asks the flower to testify for Brahma. When the flower also participates in Brahma’s lie, Shiva in all his wrath, curses both Brahma and the flower. He said that Brahma will never be worshipped on Earth and also furiously declares that the flower will never be used in any act of worship or will never be offered to the Gods. There’s another version that says that Brahma was cursed by his own wife, Goddess Saraswati. So, while Shiva and Vishnu enjoy the fact that thousands of temples dedicated to them in India, Brahma has only a scarce few, the most famous ones being the ones in Pushkar, Rajasthan and Kumbakonam, Tamil Nadu.

All these stories came to mind as I took a few minutes to observe the idol of Lord Brahma, standing with a water pot in one hand (to signify water, the first element of creation) a parchment of vedas in another and a ladle (signifying the pouring of ghee into the sacrificial pyre) in the third. This idol was missing the fourth hand, which would usually hold a string of prayer beads, which he uses to keep track of the universe’s time.

Satisfied with the onslaught of colourful mythology at this intriguing temple, we walked out of the old, old alleys of this area and caught an auto to the Lonar bus stop, to reach right on time to catch our 10:30 am bus to Aurangabad. Or so, we thought!

What ensued was, easily the longest wait for any bus in our lives! Hour after hour passed and there was no sign of that blessed bus, which was supposed to ply on this route with a frequency of every half an hour! Adding to the infuriating bus stop experience was the fact that it was super crowded, filthy and tested our patience like nothing else. We wanted to get out of there, but were helpless since we had no choice to rely on the bus. And every time we approached the enquiry counter, he insisted that it is “almost there”. Well, four hours passed and by then, we were already well-acquainted with all the pigs, goats and their grandmothers, walking around the bus stop, scouting for crumbs.

Yet, there was no bus. There was a point when I needed to use the loo and a visit to the public toilet at the bus stop ended up becoming a lesson in how to dodge crap on the floor and how to react when a woman just drops her pants and does her business right in front of my startled face! That was the last straw. We had to get out of there.

So, we walked out of the bus stop, enquired some more and found out that buses to Aurangabad pass a neighbouring town called Sultanpur, which was around 12 kilometres away. So, we boarded an auto with an enthusiastic co-passenger, who regaled us with stories of his drunken adventures, before he got off somewhere mid-way.

Soon, we reached Sultanpur and on the advice of a pan-wallah, stood right on the crossroads and jumped into a passing bus which happened to go to Aurangabad. Phew! It was 2.30 pm, we were on the way to our next destination and regardless of the fact that the bus seemed like a rickety ride to hell, we fell into a wordless sleep. The next adventure can wait.